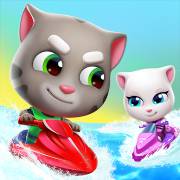 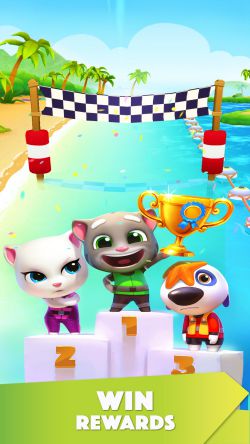 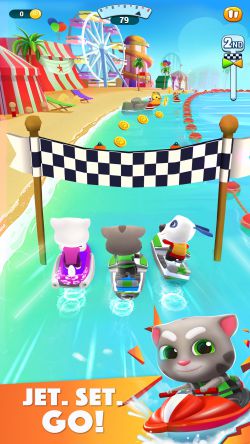 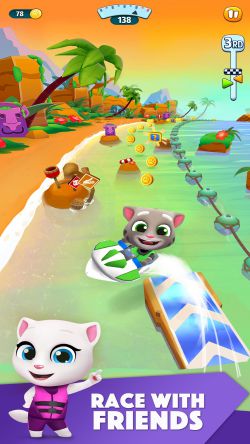 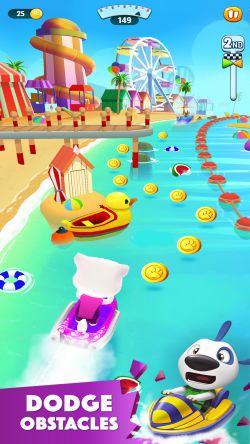 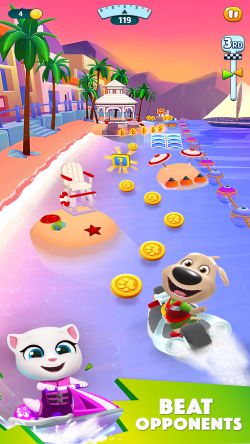 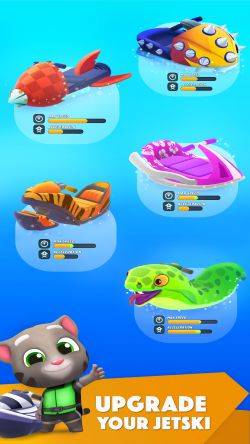 That's right! It's our old friend Tom Cat again, and he's here again! And bringing his friends along to play Jetski, so do you want to come along for the ride?

Talking Tom Jetski 2 is a casual game released by Outfit7 Limited in May 2018, with the same cartoonish graphics we're familiar with, yes! Tom Cat is still as cute as ever! And of course there's talking Angela, talking Hank, talking Ben and talking Ginger, they're all so cute. A lot of care has been taken with the graphics and each character has different expressions and actions, happy when they win and sad when they lose, and other playful and cute expressions that are just delightful! In addition, you can use your winnings to build each of your characters a luxury beach house!

The game is very simple to play, with a simple operating system to suit everyone! All you have to do is control your character and ride your motorboat at full speed, but at the same time you have to be careful to keep your speed up, if you accidentally hit an obstacle then you will slow down and give your opponent a chance to overtake you. So, be careful to avoid obstacles while driving your motorboat! As you race, you'll find that there are many different scenes, including Angela's beach resort, Ben's science lab and Hank's surf shack, so you won't be bored by a single visual experience! In addition, there are over 20 different motorboats in the game, which you can unlock by winning races. All in all, Talking Tom Jetski 2 is a great game, so give it a try!

Talking Tom Jetski 2 has a simple and intuitive operating system allowing both newcomers and players of any level to experience the joy of being a motorboat racer!

To start the game, you can choose your favourite character to be the racer for the race, such as Talking Angela, Talking Hank, Talking Ben and Talking Ginger. There are many different types of motorboats to choose from, but only a few are unlocked at the start, so you can win races and unlock more types of motorboats through skillful handling.

It is easy to collide with each other in this game, which will often slow you down. In general, it is best to go straight ahead at the start of the race and go straight between the obstacles. This technique is particularly important when using a hot rod motorboat, which is faster when going straight ahead, and a seaplane, which is flyable when going straight ahead. But this approach does not apply to the Sea Serpent as it is faster in the corners and has a more pronounced advantage. The race will end immediately if hard obstacles such as reefs, piers and boats are mounted during the race, so you need to be especially careful of these obstacles during the race. If you hit obstacles such as buoys, signs, boxes and barrels during the race, it won't end the game, but it will cause you to lose speed. In short, avoiding obstacles in a timely and effective manner is the key to winning the game! Of course some players will say that I just don't have a good grasp on how to control myself to crash, so you can try choosing a rubber duck rubber duck, bumper car or piñata, all of which will provide bonuses for crashing into obstacles.