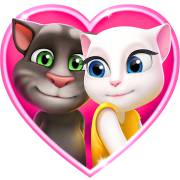 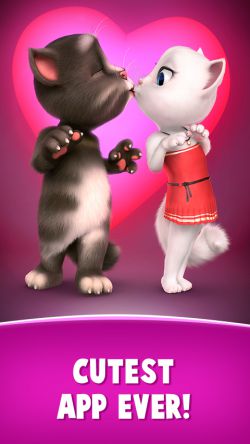 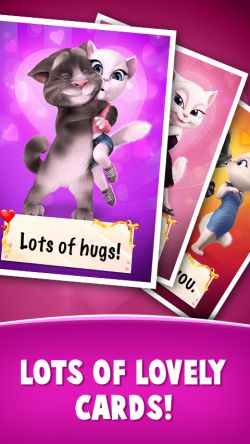 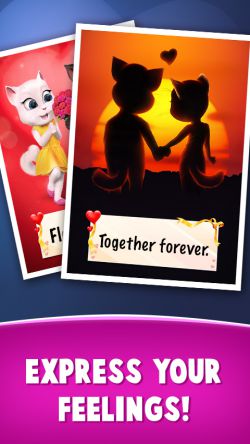 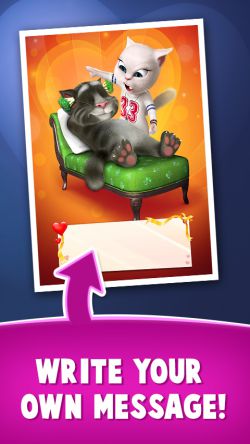 Special love for a special you. Download now and start your love story!

Want to tell that special someone what you think, but don't know where to start? Don't worry! Your friends Talking Tomcat and Talking Angela are here to help you! Here, they have lots of ideas and you can learn from them to send beautifully designed Valentine's Day cards to the ones you love. The tomcat in this game no longer learns to talk like its owner, but becomes calm and introverted, and sweetens the deal with his girlfriend by his side. In addition to the occasional eye contact, just touch the screen, Tom will kiss or hug the white cat Angela beside him. You can send personal romantic messages and cute pictures to your special someone through this.

You may want to let a friend know that they are important to you. Or express your love for someone. No matter who you are and what you want to share, Tom and Angela are here to help you! Continue. Share the love!

Tom Cat is back, with a female cat by his side

Still the same as before, its protagonist is the talking Tom, this time there is an additional as well as let him obsessed with the female cat Angela. Tom fell in love with Angela. Just one look at her, it will make his inexorable. In this wonderful Valentine's Day, accompanied by its cute little female white cat Angela. Tom introspectively shows sweetness with his girlfriend by his side. This game is tailor-made for Valentine's Day, not only with Tom and Angela sending each other rose-colored love as the background, these two cats can also pose in postcard pictures under your touch screen command. Postcard Tom or one knee down to his girlfriend to offer flowers, or because his girlfriend to other kittens to throw eyes and will be jealous. A variety of love action to surprise people. This set of 9 postcards featuring Tom Cat and Angela can be sent and uploaded via MMS, or uploaded to your personal homepage to share the sweetness with others!