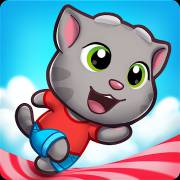 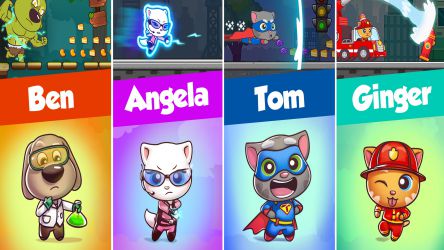 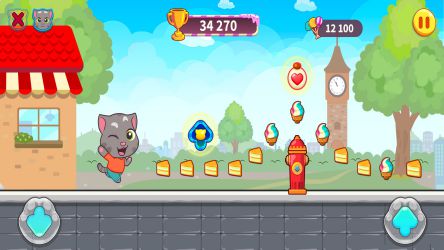 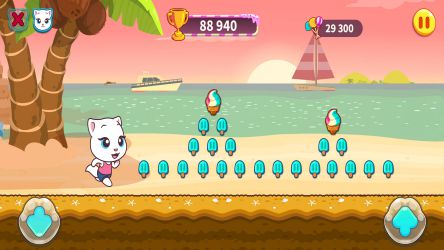 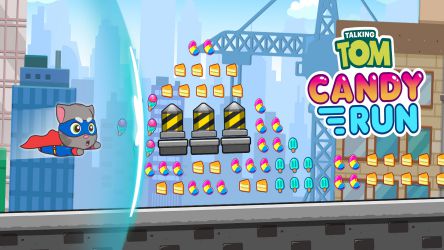 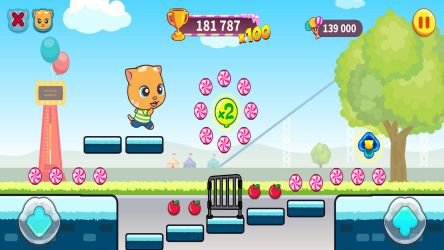 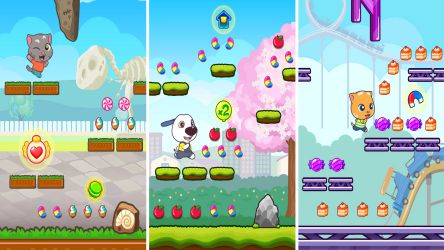 Do you remember the talking tomcat? I heard that he opened a new candy shop, but the robbers took all the sweets and threw them everywhere. If Tom wants to keep his candy shop open, he'll have to keep running to get it all back.

Talking Tom Candy Run is a casual parkour game released by Outfit7 Limited in August 2018. The game has a cartoonish style and the graphics are made with great care and the characters are both cute and sophisticated. There are many different scenes in the game, such as the street, the beach, and even the amusement park, which can give players a different visual experience. As well as the old friend Tom Cat, there are other familiar characters including Ben the dog, Angela, Hank the dog and Ginger the cat.

The gameplay is very simple - Run! Run! Keep running! In Talking Tom Candy Run, you control the characters as you simply swipe the screen to help them avoid obstacles and run safely by jumping and sliding! You will have three lives to collect the various sweets by running around and you will have three chances to make a mistake. At the end of the game you will be rewarded for the amount of candy you have collected, which you can use to upgrade your candy shop or upgrade your character.

Talking Tom Candy Run is a cute and fun runner game that's perfect for boredom, so give it a try!

Talking Tom Candy Run is a very fun game in which you play as Tom, Angela, Hank and their other friends. Your goal is to catch a thieving raccoon that has stolen all the sweets from the candy shop. Fortunately, it left them behind in its escape. Unfortunately, the candies are scattered all over the place and you need to keep running from place to place to get them back!

There are many characters in the game: Tom Cat, Angela, Hank, etc. Different characters have different special abilities, for example: you can make Tom Cat fly or Angela can turn all obstacles into candies. The graphics are cute and sophisticated, and the game is very easy to play! Just run and collect candy, jump or slide to avoid obstacles, and keep your character safe as you run and collect candy! If you don't dodge an obstacle in time, you'll lose a chance, and if all three chances are used up, the game is over! At the end of the game, you will be given a treasure chest which you can open to receive free gold, diamonds, new characters and character upgrades. The rewards in the box are based on the amount of sweets you have collected, the more sweets you have collected, the more rewards you will get! So be careful during the game, watch out for obstacles ahead and dodge them in time to collect as many candies as possible.

Are you ready for an epic candy adventure? If so, let's go!