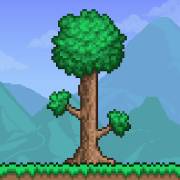 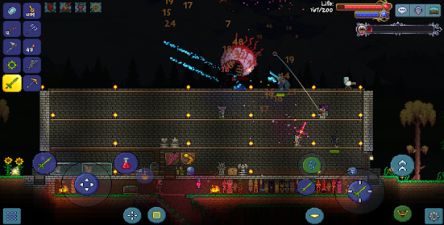 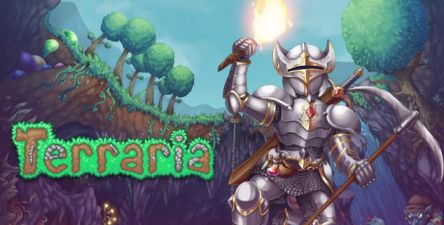 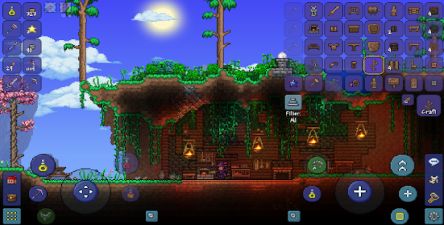 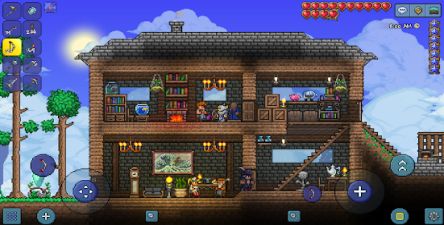 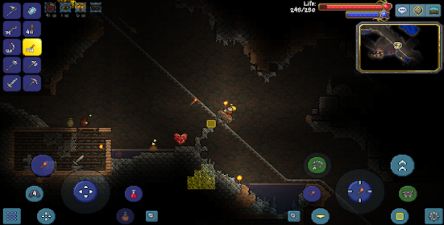 Terraria is a 2D sandbox simulation game that features exploring, creating, building, and fighting a variety of creatures in a randomly generated 2D world.

The world is at your fingertips as you fight for survival, wealth and glory. Delve into huge caves, find bigger enemies to test your fighting abilities, or build your own city - in the world of Terraria, the choice is yours!

-MULTIPLAYER - Host the game over your device's Wifi or play with up to 7 friends locally on Wifi or online via the PC-specific Mobile Terraria dedicated server (available for free on Terraria.org).

-Over 400 enemies to fight, defeat and loot

-More than 20 biomes and mini biomes to explore over and under in dense forests, barren deserts, dungeons, underworlds and even horrific corruption!

-Crafting has been updated with multiple add-on options

-Discover more than 20 NPCs, each with their own strengths and unique styles

Players will protect themselves from monsters that appear at night or in caves and fight against nearly twenty powerful bosses by uncovering useful ores underground, building structures and constructing various instruments.

At the beginning, the player is given a copper pickaxe (Copper pickaxe), copper axe (Copper axe), and copper shortsword (Copper Shortsword), which are used for mining (such as silver and gold ore), cutting down trees, and fighting, respectively. Players can use different resources to make various items such as torches, chairs, etc., used for lighting and beautifying homes.

The player also has a life value (Health), which is 100 points at the beginning of the player (represented by 5 heart patterns), to increase the cap by using the life crystals found underground, each increasing the life value cap by 20 points, with a cap of 400 points (20 life crystals), after reaching 400 life points, the player must use the life fruit (defeat the three mechanical kings (mechanical skeleton king (skeleton Commander), Mechanical Worm (Destroyer), Twin Magic Eye (Twin)) before they can continue to increase their life value, each life fruit increases the life value cap by 5 points, with a maximum of 500 points by default (20 life fruits), and can increase the maximum amount of blood for a short period of time through potion additions. Similarly, there is a magic value (Mana), starting at 20, can be raised to a maximum of 200 using magic crystals made of falling stars, and can increase the maximum magic value through special accessories. Using specific items such as medicine can restore life and magic value, while falling from high places or being attacked by monsters will reduce the life value, when the life value is 0, the character in classic mode will drop half of the money and resurrect at the player respawn point, the character in medium core mode will drop items, and the character in hard core mode will cause the character to truly "die " - all items are dropped, the player becomes a soul form, and the character disappears after exiting. Of course these belongings can be retrieved at the place of death while they are still there.

Players can get the game's NPCs to stay in houses built by players by achieving certain goals (such as getting certain money, items, etc.), and the NPCs will heal players, provide goods, etc. so that players can get better equipment. At the same time, players can also use specific items to summon bosses to enhance the challenge of the game. The game will also have random events (such as Blood Moon, which has a 1/9 chance of happening at night when at least one player has more than 100 lives) to increase the fun.

When the boss Blood Wall is defeated more gameplay elements will appear, such as Sacred Places, newly generated Sacred Places and the original Corrupted Places/Blood Scarlet Places in the map will start to spread. Of course, the monsters will also become stronger, using the sacred hammer dropped by the wall of flesh and blood can smash the demon altar / blood altar, smashing the altar your world will be given more powerful minerals, but also a randomly added piece of corrupted land / land of blood in the world.

The game offers four types of professions, namely warrior, mage, summoner and archer, and you can experience the content of different professions by wearing different equipment.